19 Days through the Annapurna Circuit: Part 4 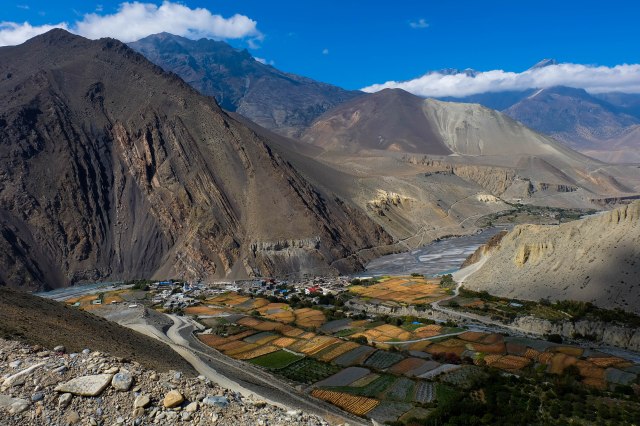 “You know what’s interesting?” Kyle remarks, “Where there is water, there is life.” Kyle said this as we first set our eyes on the village of Kagbeni after three hours of difficult trekking.

We left Muktinath this morning, our legs filled with aches and pains after our previous day’s hike up 1,000 meters to the mountain pass, and 1,600 meters back down the other side.

At first the walk was lovely, despite all the soreness, as we walked through a moment of fall. Trees were green changing to yellow and trickling streams poured across deep brown soil as we hiked across stone bridges and in between grazing land for cattle.

Unfortunately fall quickly turned to dust. I mean this literally as the trees and shrubs faded away, leaving us with only a gravel dirt road and vacant tan hillsides in all directions. As we trudged forward on the road, jeeps, motorbikes, and ‘deluxe’ buses continually rode past us kicking up clouds of dust and making it difficult to see or breathe. When vehicles weren’t passing us, it was the wind that wound up wisps of dirt to meet us.

Therefore, when we finally laid eyes on Kagbeni, it was similar to spotting an oasis in the desert. The village lies in a valley cut in half by the Kali Gandaki River. On either side of the river are squares of gold and green farm land and scattered orchards.

The village was first sign of vegetation we’d seen in hours. Despite its seeming impossibility, the river brought vibrant life to the otherwise barren land of dust. 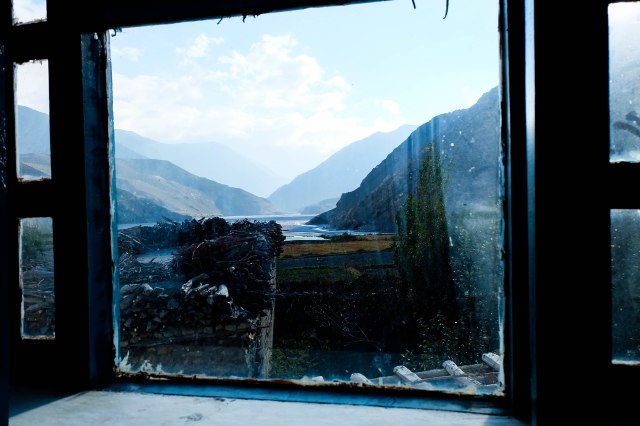 Although this trek has been filled with strenuous and challenging days, we’ve in fact taken a more leisurely route than most. Many trekkers with short holidays and precise time tables created by their guides and porters plan on doing the Annapurna Circuit in 10-13 days.

Our timetable on the other hand has been structured around one date, October 28th, our flight out of Kathmandu. This means when our muscles get sore or we want an extra day to simply take in the mountain views before returning to the vendor filled streets of Pokhara and Kathmandu, we have the luxury of simply taking it.

If there was ever a need for a rest day, it was today. After having valiantly pushed forward the day after hiking the pass to get to the village of Kagbeni everyone in the groups’ muscles were starting to feel like jelly. Walking up the stairs became a mission and even sitting up made us feel unsteady on our achy legs.

As the wind howled past the village, we gazed out our bedroom window and watched a golden eagle soar atop the currents as it hunted for prey. Our muscles thanked us as we snuggled in bed and caught up on the reading and writing our more active days just couldn’t afford us. 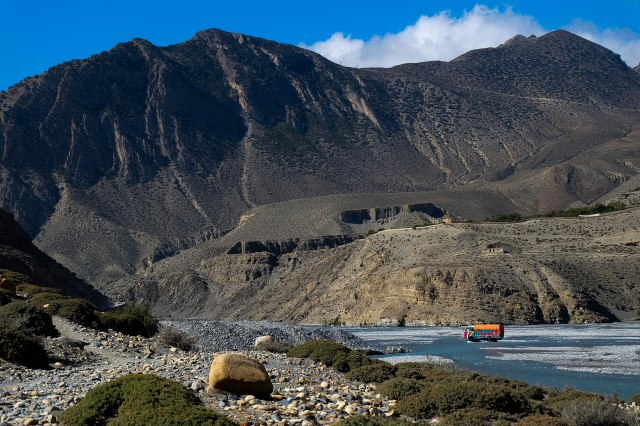 By the time we left Kagbeni we were beginning to forget the aches left behind by our big day over the pass. We’d spent the previous day playing card games and wearing out a now familiar food menu. The goal was Jomsom, and as long as we made it there before the noon day winds picked up it’d be an easy walk.

We set off at 8am, following the river which winds through Kagbeni on the way to Jomsom. We’d read that the riverbed is famous for it’s ammonite fossils, as the area of Mustang was at the bottom of a sea a hundred million years ago. So as we walked, we took time to sift through stones and rich black sand for anything interesting.

Eventually the path split, one direction along a dusty road, another detoured up into the hills and the last snaked down the side of the riverbed. Not in a hurry, and excited to try our luck at fossil hunting, we returned down to the riverbed.

Almost immediately we were successful, the path was rich with shell fossils and crystals. We took our time, working our way along the side of the river, occasionally having to remove shoes and socks and rolling up our pants to cross small rivulets.

After about the two hour mark, we turned the corner of the valley into a strong wind tunnel. Unperturbed, believing Jomsom to be around the corner, we shouldered on. Suddenly out path ended, the river had widened to the cliff and there was no way forward. We turned back to our maps to work out how to proceed.

In our excitement we hadn’t paid enough attention to the markings, our small trail ended in a river bed and didn’t in fact continue on to Jomsom. We were stuck. Backtracking, we looked for a shallow area to cross the river to join the road on the other side but it wasn’t looking hopeful. Our only option was to return the way we came. 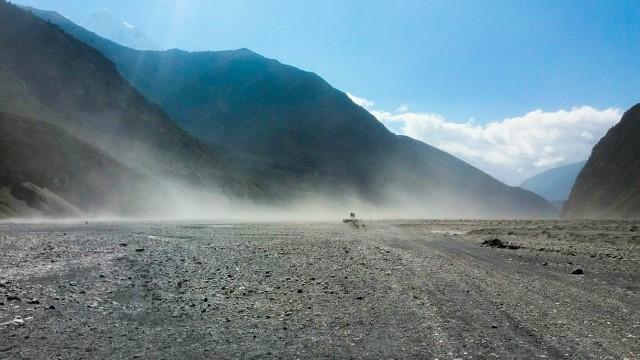 When we eventually rejoined the dusty road the winds had reached their full intensity. Using sunglasses and face masks we had bought a few days prior, we covered as much of our faces as possible. Jeeps and motorcycles roared by, shooting clouds of dust and stone into the air. We wrapped ourselves tighter and pushed on into the storm.

Huge gusts of wind would send dust from the river bed into the sky, filling our vision with nothing but a brown haze. The fierceness of the wind meant we were constantly battling our way forward, never allowed time to relax or gather strength.

The path slipped between stony river bed and sandy road, and for another two hours there was no chance for a break. Our legs began to curse us and our feet suddenly remembered the onslaught of a few days past. We gritted our teeth and moved ever forwards into the storm.

Eventually Jomsom came into view, obscured by the dust but close enough to bring a little kick to our step. We climbed out of the riverbed into the dust soaked town and took cover behind a city wall. Exhausted, but momentarily optimistic about the prospects of the town, we set off to find a room.

Tea house, hotel, guesthouse, whatever they called themselves they had no place for four dust caked hikers. It took two hours and at least 20 unsympathetic faces saying “no rooms” before we eventually found a four bed room to put our bags down in for the night.

Tired, beaten and at the last of our patience we had nothing to do but laugh. Sitting down over beers, and another carbohydrate loaded menu we reminisced about all the beautiful moments of the last two weeks. For every challenge we’ve endured the rewards had come tenfold, and this last day of dust storms, fossils and river views was certainly no different. 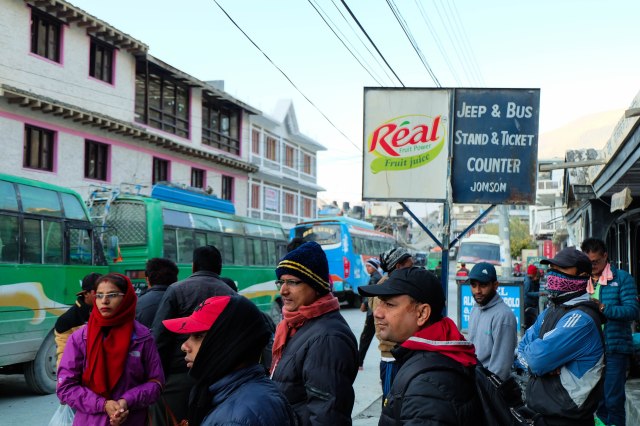 You might not have heard the adage that “where you go by bus, you must return by bus”, but often it’s an inescapable truth. With an early night in Jomsom behind us, we woke up 5am the next morning to face the 10 hour journey ahead.

Our early rise proved unnecessary as a whole two hours passed before we climbed onto a rickety old bus that had been sitting empty up the street for at least the last hour. The word ‘DELUXE’ had been painted in big white letters on the back, fooling no one. We bent and twisted our legs into the undersized seats, trying to find a comfortable position to ride out the journey. Before we could, in climbed our teenage bus driver, a big grumbling bus ‘conductor’ and off we went.

Immediately dust rose up off the floor and seeped into the bus. Locals quickly whipped out face masks, while the rest of us, unprepared, coughed through the haze. Just as we were on our way the bus made an unexpected stop. People suddenly clambered off, the bus conductor’s grumbling intensified and the rest of us sat totally mystified. It was a whole forty-five minutes later before the engines eventually rumbled to life again.

Soon breathtaking valleys opened up around us and the roads narrowed in response. The bus bounced and swayed along the cliffs, passing tractors and jeeps on roads only barely big enough to do so. Occasionally the bus would tip to one side or the other, as its wheels battled to find a grip in the holes and rocks that made up the road. The bus participants would collectively gasp as we stared down the side of the cliff at the river below, or brushed up against the side of the cliff.

For ten hours the bus dipped in and out of valleys, wobbling and shaking its way through a spectacular (but hard to enjoy) mountain backdrop. When the sun began to fade, the dirt path turned to paved road offering only a slight reduction in discomfort to our journey. It was a full twelve hours that had passed before the bus unceremoniously dumped us at a roadside corner, local taxi drivers at the ready for the obviously routine tourist offload. 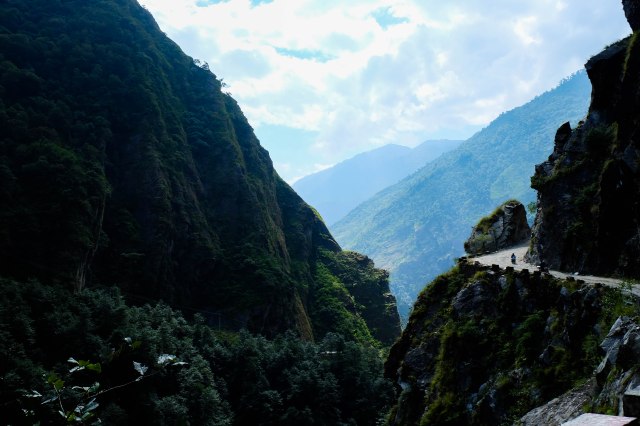 Just like there are two sides to every story, I was starting to believe there were two sides to every mountain range. Since we made it over the pass the mountains had laid barren of vegetation, except for patches of growth stretching out from villages in the riverbed. We had spent the last two days hiking through a valley of harsh wind and dust and I missed the shrubs and pines that had been frequent encounters at this height on the other side.

In the morning we took a tourist bus best suited for someone 5 foot 5 inches. With our knees cramped at unnatural angles, we braced ourselves for an uncomfortable 10 hour ride back to Pokhara. As we descended from Jomsom, dust found its way through the glass and metal of the bus, creating a thick haze as we hurtled through the barren valley.

After a couple of hours however, the scenery shifted back to the familiar. The dust had settled and waterfalls spilled from the cliffs above to wet the roads along the way. Ferns, moss, bamboo, and pine trees surrounded us once again. Going back down into the green valleys sparked memories in reverse of the days that led us up into the dusty mountain peaks.

As we passed through evergreen forests and rolled down into apple orchards and rice terraces, I was reminded of the epic landscapes I had seen in the past two weeks. I had felt ready to leave behind the wind and dirt, but now I was simply filled with a deep gratitude towards the depth and beauty the mountains had provided.

3 thoughts on “19 Days through the Annapurna Circuit: Part 4”