We started out the day again with bagels and delicious coffee and if this is what it means to live in New York then I fully understand the appeal of the city. Our hosts have been too kind to us, making sure we are always stuffed with good food and drink. After Alice and Gabe left for work we took the time to work out our plan, checking off what we’ve done already and deciding what we’d see next.

Needing to at least be able to tell people I’d been to Times Square, a place I only really understood as a giant advertisement, we set off in that direction. We hadn’t gone more than 500 meters before we decided that we’d need some more fuel in our bellies before we stepped on to the subway. Luckily right in front of us, stood a restaurant which served one of the more confusing (to me) meals that you don’t hear about anywhere else other than American movies and television. Chicken and waffles. 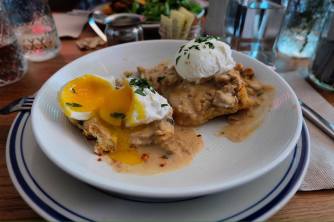 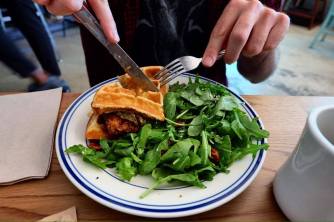 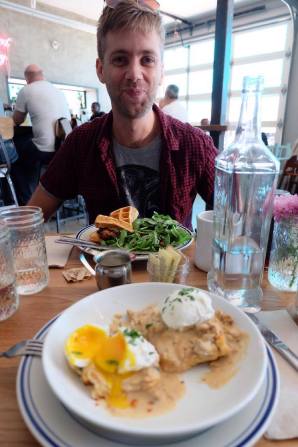 This strange combination of sweet and savory had never exactly got my taste buds watering and when I took my first bite of a chicken waffle sandwich it was exactly as I expected it: full of flavours I like, but in an unenjoyable contrast. Mari looked at me as if I was an idiot and simply said “try this” as she handed me a bottle of hot sauce. I looked at her as if she were an idiot and thought “sure”. It turned out, as it does so often, I was wrong. The hot sauce turned the dish from a mistake into something greater than its three parts, a delicious meal I would certainly order again. We also shared the traditional American biscuits and gravy and while it was delicious, the hot sauce again took it to something incredible.

Times Square was about as I expected it, a mish-mash of television screens and advertisements without any real charm or reason. It was good to have been to this iconic site, but out of all the fascinating images this city has to offer, it’s the least memorable. Perhaps at night it might inspire some more wonder as I’ve heard all the lights make it seem like day time at any hour. 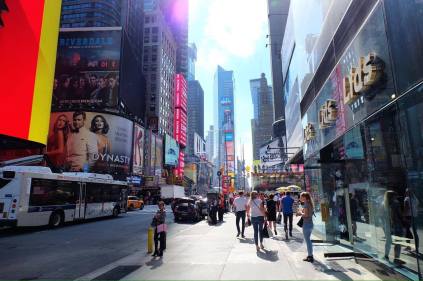 From Times Square we made our way back to Central Park where the sun was shining and the green trees with a back drop of skyscrapers was a much more visually appealing way to spend our afternoon. We walked the park taking in the sites before kicking off our shoes and stretching out on one of the extensive green stretches of grass. 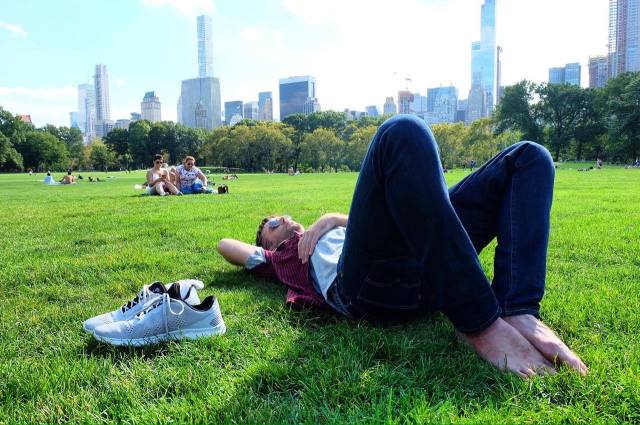 Eventually, as the afternoon ticked away, we dragged ourselves from the Park to check out another essential attraction of the city, the High Line. The High Line is a linear park that is built on an old railway line that runs above a part of the city. The winding stretch of park has a path that runs through carefully cultivated gardens that contrast with the buildings and traffic below. Benches mark the path from time to time and occasionally vendors sell juices, ice cream and snacks. We wandered the path for a while before returning to the city streets to find a place for mid afternoon beers and chicken wings. 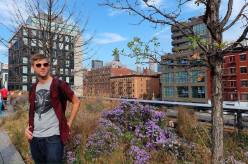 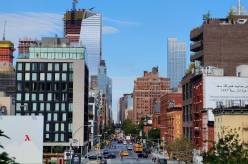 After finding our way to the East Village, we passed the last of the day with sour beers before heading to Chinatown to meet Alice and Gabe. Here we experienced what it was like to try and eat at a popular New York restaurant. We waited over an hour for a table, crowded together on the sidewalk next to groups of other hungry people and felt for an moment like true New Yorkers. Eventually we piled into the cramped little Chinese restaurant and filled our bellies with tasty marinated chicken, thick noodles and soup dumplings before eventually falling asleep in the Uber on the way back home.

One thought on “An American Journal: Day 4 (New York) ”