Next morning bright and early we sipped hot coffee around the kitchen table while Mari’s sister Jennifer deftly turned the kids’ excitement at having so many visitors into energy focused on getting ready for school.

We let the early morning pass without much notice, allowing for conversations uninterrupted by the concerns of the day. However as 9am approached, we began to gather our things in preparation for the five hour road trip from Chicago to Mari’s family’s cabin in Wisconsin. The rain that Bill and Wendy had driven through yesterday sat atop our house in the Chicago suburbs and strapping our bags to the roof of the car was a damp affair. Mari’s dog Bruno curiously looked at us from inside the car, bemused at our efforts to strap down the last of our gear. We said our goodbyes to Mari’s sister and left the suburban houses, half of which were already decorated in preparation for Halloween, and linked up with the interstates and highways which weave their way through and around the city.

Our first stop was Madison, the capital of Wisconsin, a city Mari’s father Bill had spent some time working in years before. The drive between Chicago and Madison was another reminder of the expanse of the country as not once did we pass through an area unmarked by some sort of development. If buildings didn’t stand alongside the road then corn fields would stretch out to farm houses further back in the horizon.

Madison itself is an attractive city which is built around several lakes, the streets are clean and lined with trees which bring colour to the modest sized homes and office buildings. We pulled up towards the middle of town to find a little restaurant that Bill and Wendy remembered being remarkable just near the city’s classically beautiful capital building. After quick lunch of chicken and mango chutney, and turkey and pear sandwiches, we were back on the road to the cabin. 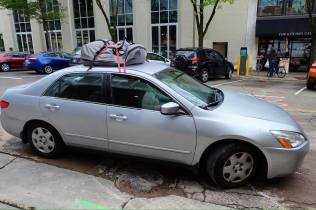 The further we got from Madison the more it seemed that fall had begun to catch up with the landscape. The hills also became more pronounced. We began to drive between valleys of green farmlands and fading orange and gold tree lines. The small towns we passed through looked similar to depictions of American small towns from television, although perhaps a little more run down and less cohesive than their television counterparts. Between towns sat more sporadic farm houses, each with a either a rusty old car nestled in long grass or a half constructed building long abandoned to the wear and tear of the elements. Rarely we’d see people working among the buildings, perhaps because the late afternoon was cause to rest or the season just didn’t require more work than the stacks of hay wrapped in white plastic which already lay among the fields.

Mari’s family cabin lies tucked away in one of the hills of trees, hidden from the small road which runs below. The entrance is marked by a small wooden gate and a bright red sign on which the address is written. We pulled up and unloaded the packed car into a little metal cart which is used to carry the bags of clothes and food from the road side gate up to the cabin. The cabin itself is humble in size but impressive when you consider that Bill built it all himself. The interior of the cabin has been decorated by Wendy with big wall murals and small distinct touches which make it feel loved. Candles sit atop several tables and shelves, each paired with an assortment of trinkets, statues and pictures filled with happy moments of the family. The walls are painted in warm colours and patterns, filled with family pictures, symbols and photos which match Wendy’s spirituality and beliefs. 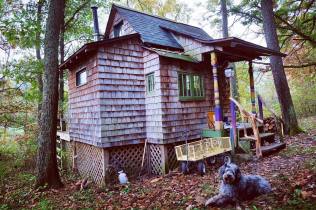 Outside a kitchen area has been crafted, protected by a big blue tarp which covers both the kitchen cupboard, table, shelves and a fire pit surrounded by wooden benches. Further up from the kitchen you follow a path up into the bushes where a rudimentary toilet has been set up just out of view of the campsite. The trees around the area offer up a green canopy that shields the cabin from view. Here and there are patches of poison ivy to watch out for among numerous other low and less threatening shrubs.

After wheeling the little cart up and down the small path between the car and the cabin we managed to unload all our gear and set up the kitchen with plenty of time to spare before it began to get dark. Wendy began to prepare dinner while we took the moment of rest to sip some local beers we’d picked up at a gas station along the way. Before night began to creep in around us, we built up a fire in the pit and fed it several large logs that had been kept dry under a tarp, so when night finally fell proper around us we hardly noticed the chill that came with it. Wendy served up a dinner of kebabs skewered with shrimp, chicken, steak, peppers and pineapple which helped further warm us against the falling cold of the evening.

We climbed into bed under thick down covers and woolen blankets to call to an end our first night at the cabin.

One thought on “An American Journal: Day 9 (Chicago -> Wisconsin)”