We woke up the next morning a little worse for wear after a night of cocktails and second hand smoke. Despite keeping our clothes outside and a series of vigorous showers, the clinging smell of stale smoke made its way into our room. We felt a little bad leaving the room smelling bad so we stripped the sheets and cleared the room out completely to give it chance to air out without any of our travel worn belongings adding their scent. It took a blast of cold Chicago air from an open window to finally return the smell to normal and free us of our guilt. It was a moment to appreciate that we live in a time when smoky clubs and bars are almost completely a thing of the past.

We had a flight out to New York at five pm but Mari’s friend Ryan insisted that he pick us up for an early lunch to check out a restaurant called Freddy’s Pizzeria in the suburb of Cicero. From the outside of the building there’s nothing to give away the quality of food you’re about to indulge in, but as soon as you step into the shop, the aromas are a dead giveaway that you’re in for a treat. The shelves are stocked with Italian spices, pastas and other delicacies but the real magic is in the freshly prepared Italian food that is on display at the counter. We loaded up our order with chicken parmesan, gnocchi with tomato vodka sauce, a slice of margherita pizza, a giant salad and a bunch of fresh olives. There was a bigger selection than that and everything looked good but already our tray was piled precariously high with plates and our eyes were almost certainly bigger than our stomachs or our wallets. We took our food through to the little section next door which was  a small room already crammed full of people sitting around little tables with classic red and white tablecloths. A tabled happened to clear just as we entered and we wasted no time stuffing our faces full of food before our bodies could protest. 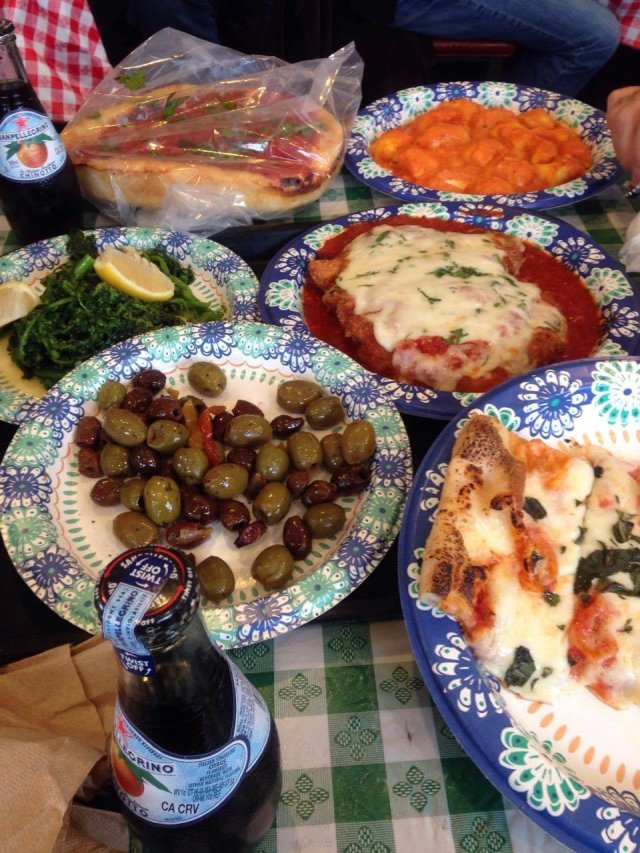 Ryan dropped us off at home after a final farewell coffee from a local shop. His enthusiasm for showing us a good time had been thoroughly appreciated. We didn’t have long at home before it was time to leave for our flights, so not long after walking through the front door we were marching back out to fill the trunk of Mari’s sisters car with our backpacks. Jennifer had been kind enough to offer us lift to the airport which shaved time off our travels and allowed Mari time to hang out with her niece and nephew in the back seat before our final goodbyes. At each turn of this holiday we’d been incredibly lucky to have Mari’s friends and family treat us to a lot of generosity and kindness and it was not without a little sadness that we had to make another speedy goodbye at the stop and drop outside O’Hare International.

The flight out was a lot smoother than the way in and the threat of a panic attack was only a vague chance, rather than the imminent prospect it had been on the way to Chicago. By the time we flew over New York the sun had set and we were lucky enough to be able to catch the bright city lights of Manhattan out of our plane window. It was a spectacular entrance back into the Big Apple and a fitting way to be reminded of the magic of the city. Chicago and the Midwest had been full of fantastic experiences but, as you might be able to tell, New York captured my imagination the most. Wearily, we followed a confusing trail of signs to the pick up spot of LaGaurdia Airport and ordered a Lyft to take us back to Mari’s friends’ apartment in Brooklyn. We were back in New York city, and the next day would be our last before we began the painfully long journey back to Thailand.